I am registering mt1 and mt0 to mt_t1 to calculate both MTR and MTsat maps later. While mt1 co-registers to mt_t1 space fine, mt0 does not. I assume this is because of the poor contrast on mt0.

I’ve tried algo=rigid and algo=slicereg (screenshot attached) but both were not good.

I tried experimenting with metric=MI instead of metric=CC but this did not resolve the issue either. Cord segmentation of mt0 using sct_deepseg_sc was also not good; thus, other algo parameters (seg only) did not work too.

Do you have any suggestion on what I could try to fix the registration so I don’t have to lose this data? 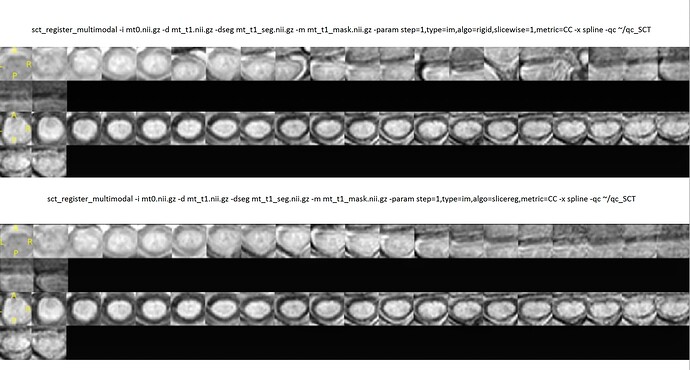 I’m very sorry for the late reply. We had issues with the notification system of this forum. Anyway, I’m here now

So: your diagnosis is correct: the co-registration is failing because of the relatively poor contrast between the cord and CSF on the MToff data.

The algo you used are good. Slicereg being probably the most reliable.